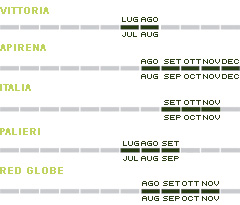 The grape is an energy-giving fruit, particularly rich in water, sugars and purifying mineral salts such as potassium, magnesium, phosphorus, calcium and iron. It has powerful anti-oxidant properties. The most popular varieties include:

VITTORIA: known as an early ripener. The bunch is pyramid-shaped, the yellow-coloured fruit has a neutral flavour and an elongated shape, medium to large in size (6.5 g).

APIRENA: one of the finest varieties of table grapes. Those with white skin include Sugraone and Thompson, originally from California. The bunches, almost perfectly formed, are cylindrical and wing-shaped with an average weight of 600-1000 g.; the fruit is light yellow in colour with crisp flesh and a neutral flavour. The Sugraone in particular is known for the absence of seeds and early ripening. Crimson Seedless: the grape has red-purple colours and cylindrical-elongated shape; it has crisp flesh and neutral flavour. The bunch is medium-large sized and weighs about 500-600 gr.

ITALIA: one of the best-loved varieties of eating grapes because of its appearance, flavour and ability to withstand handling and transport. Its bunches are large and evenly sized with golden-yellow fruit and a pleasant, delicate flavour.

RED GLOBE: characterised by the very large bunches and well-sized fruit which is pinkish-red, spherical in shape and weighs between 8-11 g.

M. PALIERI: this variety is very popular thanks to its durability and ability to travel well. It is readily accepted in the market place because of the high quality bunches with their large, oval fruits, medium-thick peel and sweet, succulent, crisp flesh. 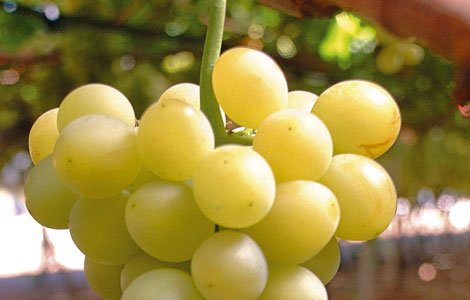